Thankfully we have 7 other Performing Arts Classes for you to choose from. Check our top choices below or see all classes for more options. 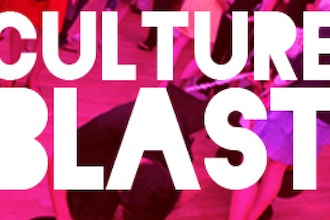 at IA&A at Hillyer - Dupont Circle

What you'll learn in this music performance class:

Join us for our September CultureBlast featuring Hip-Hop artist Mana Eini with a special performance and workshop event.

Since the early ’90s, artists such as MC Lyte and Missy Elliott have written explicitly feminist Hip-Hop anthems. Now there is a new artist setting the tone for a new age of female MCs and she goes by Mana. Her music is a reflection of her Middle Eastern heritage. Rapping in both English and Farsi, Mana combines her Middle Eastern sounds with soulful singing and an enticing flow.

She is also the founder of the international women’s collective Lipstick Revolt. In an interview with FemBot Magazine, she explained that “Lipstick Revolt” is about “making a statement without the intention to.” Through Lipstick Revolt, she empowers other female MCs, artists, and poets to express themselves as well as raise awareness about various political and social issues. Inspiring others and pushing boundaries, Mana is quickly making a name for herself in hip hop. S

he has shared mics with the likes of Talib Kweli and KRS-One as well as performed at festivals such as Washington, DC’s Gay Pride Festival. Mana recently performed on the Kennedy Center’s Millennium Stage. Her new album is set to drop in October 2017, meshing her gifts not just as a rapper, but as a songstress. Mana is inspiring people to reach their goals and to keep their sanity amidst a chaotic world.

Presented in collaboration with Words Beats & Life, Lipstick Revolt, and the Aftab Committee.

Booking is safe. When you book with us your details are protected by a secure connection.
Lowest price guaranteed. Classes on CourseHorse are never marked up.
This class will earn you 80 points. Points give you money off your next class!
Questions about this class?
Get help now from a knowledge expert!
Chat with us! Contact us
Questions & Answers (0)

IA&A at Hillyer is a contemporary gallery dedicated to serving the public with quality exhibitions and programming. Established in April 2006, Hillyer is a program of International Arts & Artists, a non-profit organization dedicated to increasing cross-cultural understanding and exposure to...

Read more about IA&A at Hillyer

This school has been carefully vetted by CourseHorse and is a verified DC educator.

Save to Wish List
Taking this class for work? Get exclusive perks & discounts for free. 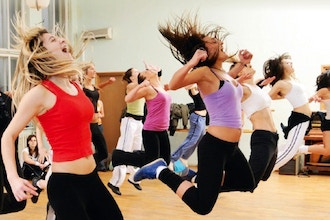 Are you ready to party yourself into shape? Forget the workout, just lose yourself in the music and find yourself in shape at the original dance-fitness party. Zumba® Fitnessclasses feature exotic rhythms set to high-energy Latin and International beats like Salsa, Samba, Bachata, Cumbia, Raggeaton, Cha-Cha, Merengue, Belly Dancing, Indian and more!! Before...

Are you ready to party yourself into shape? Forget...

This course is designed for students with little or no salsa dance experience. This class will teach basic fundamentals of salsa timing, rhythm, footwork and an introduction to partner dancing helping you build a SOLID Salsa foundation. Our goal will be to raise your awareness of timing, technique & basic body movements so you can dance the night...

This course is designed for students with little or...

$40
20 Seats Left
Don't see any dates that work for you?
Add to Wishlist

This course is designed for students with little or no Bachata/Merengue dance experience. This class will teach basic fundamentals of timing, rhythm, footwork and an introduction to partner dancing helping you build a SOLID Merengue/Bachata foundation. Our goal will be to raise your awareness of timing, technique & basic body movements so you can...

This course is designed for students with little or... 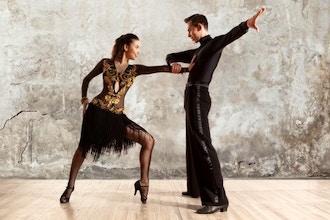 Designed to create a great foundation for the social dancer. You will learn tempo, lead and follow, foot position, alignment, and poise in several different dances. Note: No black soled or rubber sole shoes. Shoes allowed on the dance floor are jazz shoes, practice sneakers, social shoes with leather soles, or suede. Socks are ok. Absolutely...

Designed to create a great foundation for the social...

$17
20 Seats Left
Don't see any dates that work for you?
Add to Wishlist

Designed to create great foundation for the social...

$17
20 Seats Left
Don't see any dates that work for you?
Add to Wishlist

Introducing more complex steps and patterns based on skills developed in the Beginning class. You will be doing different patterns with turns, cross body leads, and some styling. Continue to develop leading/following and turning skills in order to prepare you for the next step. This class is to take the fundamentals to the next level. Note: No black...

$40
20 Seats Left
Don't see any dates that work for you?
Add to Wishlist

Come rock out with BollyX - The Bollywood Workout and experience dynamic choreography set to the hottest music from around the world. This 50-minute cardio dance workout cycles between higher and lower-intensity dance sequences to get you moving and stay motivated at the same time. At the very core of a BollyX workout is the inspiration it draws from...

Come rock out with BollyX - The Bollywood Workout...

This class has 2 more dates.