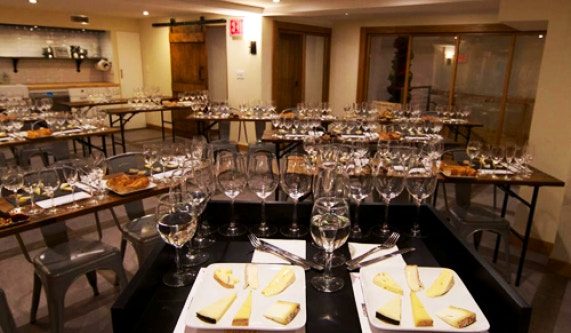 The History of New York's Oldest and Best Cheese Shop:

Murray Greenberg (never met him; he died before I got here) was a Jewish Spanish civil war veteran and communist who opened a wholesale butter and egg shop a few doors up Cornelia street in 1940. The old timers tell me that even though he was an old leftie, he was still a street smart capitalist who used to buy cheese cheap and trim it and sell it. In the 70's he sold the shop to his clerk Louis Tudda, an Italian immigrant from Calabria.

The old shop was used like a bodega or a Korean deli is today; not only cheese was sold but cheap oil and tomatoes to the locals, who were predominantly Italian back in '91 when I bought the shop. That's changing now.

I'd left the family supermarket business in '85 to do full service specialty shops in New Jersey, where I was from. When my shop, in Princeton tanked with the crash of '87, I wound up in my brother's old apartment here in the Village (he's a lawyer and he'd moved to L.A.), wondering what to do with my life next. One day, when I was in line at the original shop, I heard Louis say he'd lost his lease and was closing. I made him an offer and moved the shop to the corner of Bleecker, where we stayed 14 years, until November '04, when we moved to our current location at Bleecker and Leroy.

Frankie came with the shop; he lived around here and had been the delivery boy, then a counterman through college, and stayed here when his folks returned to the island of Malta where they were from. Louis himself worked for a year before he went back home. We'd hang out behind the counter selling cheap cheese, mostly commodity stuff bought on deal.

Around ten years ago we got serious about the good stuff, and at first we couldn't sell it. Now we can't keep it in stock! The first line we got in was Neal's Yard Dairy cheese, and boy, did it sit there in the case. The old neighborhood is changing. Zito's bread, older than Murray's even (1920) is gone, and so is the pioneer of all, Balducci's up on 9th St. (Citarella's there now). But the new customers are a lot younger and hipper.

We always had a good staff, though this is by far the best. I'm often grouchy, but everyone else was, and is, really very nice. Go figure. And the business grows each year.

These days I can barely keep up on all the new stuff that's going on: we have a kitchen, a new web site, mail order, a gift catalog, a classroom and cheese caves. It's not quite anarchy but it's certainly not corporate. It's the Village: artists, folkies, poets, creative types have made this their home for over a century. Our shop in Grand Central even has the feel of it.

The main thing is to let the customers see our passion, that's what it's all about. Turn them on to whatever we've got going. Taste it yourself. My Grandpa, whose own store is in a picture above the dairy case (ca. 1925), and an immigrant (Russian Jewish) himself, always said, in that sort of accent of his, 'go on, take a taste.' Nothing's changed, I suppose. We tell them, 'here, take a taste.'

Loved everything! Can’t wait for my next class.

Relaxed, informal atmosphere with friendly staff that feels like a class / cocktail party without the mingling. A little difficult to hear from the back section of the room a mic would solve for this. Wish we learned more of a method to identify cheese attributes like crystallization than the cheeses themselves.

Our teacher was incredible and the class was 10/10

Great date night activity. The instructor was very knowledgeable and it made for a wonderful experience.

The class was great! I do think the experience would have been enhanced if we were allowed a few minutes to “turn and talk” to our neighbor and share our experiences about each wine, cheese, etc. Although the instructors were open to us raising a hand and sharing directly to the instructor, we didn’t have the chance to talk amongst each other and share and listen to others in a more interactive way. I also recognize that time is a factor, and I think perhaps even cutting out one cheese or wine from the flight to allow for more time to reflect and share would be a positive step. In a nutshell, I think this type of class is social in nature with a focus on how diverse perspectives can be. That being said, adding in minutes to share experiences, especially if we aren’t attending the class with a group, makes it more fun while simultaneously building community amongst the attendees.

Really great and interesting pairings. Glad that the wine pairing was not overly complicated - one red and one white. I was introduced to delightful cheeses - from the subtle ones that surprise you with layered flavours, to the obvious in your face flashy funky cheeses that leave you wowed. Would definitely sign up again - eyeing the cocktail and cheese pairing class.

Instructor was great and informational, learned a lot about different cheeses and learned a lot about cheeses I liked/don’t like. Great experience, even went downstairs afterward and took a couple of the cheeses we tried home. Drinks and snacks were great as well. Keep up the good work!

The teacher of the class, Chiara, was friendly and very informative. She encouraged us to ask questions and didnt cut her answers short. Also, there was unlimited white and red wine to go with the seven delicious cheese samples and great snacks too! I highly recommend this class and plan to attend the other classes they offer! A very enjoyable experience!

This is such a fun and informative class. The instructors were amazing- especially Jen!

Pairing Perfection: Taste of the States
Next start date: